The basic idea of a transistor was conceived back in 1947, and this invention sparked a semiconductor revolution that paved the way for integrating electronics.

The bulky packaging required for vacuum tubes became many orders of magnitude smaller with the transistor. People started to marvel at the small size of transistors and calculators that started to appear in the late 50s. Computers that could barely fit into a closet in the early 50s are now pocket-sized and include even more computing power.

A bipolar junction transistor is basically two signal diodes connected together in series within the same piece of semiconductor material such that the two anodes (or cathodes) share a common semiconductor region. This region is the thin middle layer of a transistor, which is a lightly doped P-type or N-type semiconductor material. There are two junctions between the three layers, and this is why the device is called a bipolar transistor. There are three terminals on a bipolar transistor: base, which is the middle layer; collector, which is the outer layer that is normally reverse biased with the base; and emitter, the outer layer that is normally forward biased with respect to the base. 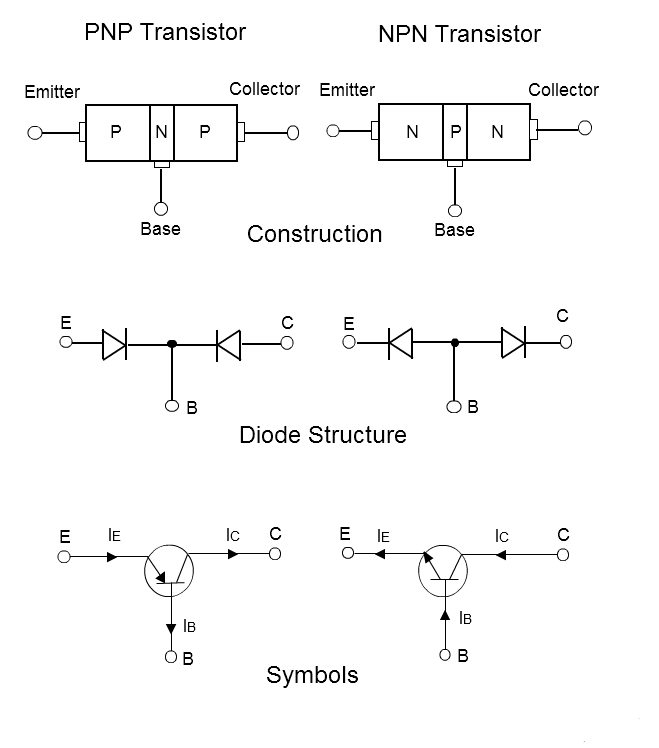 Bipolar Transistors are current regulating devices that control the amount of current flowing through them in proportion to the amount of biasing current applied to their middle layer terminal (base).

The transistor can be used as a current amplifier, voltage regulator, switch, and many other functions.

There are two basic types of bipolar transistor construction, PNP and NPN, which basically describes the physical arrangement of the P-type and N-type semiconductor materials from which they are made. As the compositions of the two types are opposite, it follows that biasing considerations for the NPN type of transistor are opposite to those of the PNP type.

There are basically two reasons why this phenomenon appears in one but not the other. First, the base region is made very thin, so the two outer layers can conduct current straight through, as though the middle layer wasn't there. Majority carriers in the collector region can shoot right through before they have a chance to recombine with the opposite majority carrier in the middle layer.

The second reason is the fact that the emitter region is very heavily doped while the collector and base regions are lightly doped. This creates a situation like a valve controlling water through a pipe that has high pressure on one end (the water supply). A small pressure on the valve can control a large amount of water flowing through the pipe. In the same way a small change in the base current can produce a much larger change in the collector current. If the base current drops to zero or the forward biased voltage is removed, the collector current would cease to flow.

An NPN type of transistor is considered here, although the same applies to the PNP type, except with opposite voltages and currents.

The emitter current is actually equal to the sum of the collector and base currents for both NPN and PNP transistors. It is surprising that only a small percentage (maybe about 1%) is base current, even though it is forward biased with the emitter. Most of the current flows through the collector region instead, even though the collector-base junction is reverse biased. This is the phenomenon of a transistor's amplification, where a small change in the base-emitter current can produce a much larger change in the collector-emitter current. So very few of the electrons that enter the base from the emitter region will come out through the base terminal.  Another small percentage will recombine with holes (majority carriers) in the base region, similar to diode characteristics.

The vast majority of the emitter electrons will diffuse right through the thin base into the collector through the base-collector depletion region.

This depletion region generates an electric field that is proportional to the collector supply voltage. This electric field normally blocks the flow of holes (majority carriers) that are present in the base region. But now with an excess of electrons, they can be accelerated directly through this field because it has an opposite effect on electrons. Once electrons have passed through from the P-type base material into the N-type collector material, they can freely flow as majority carriers again. So when electrons enter in though the emitter, they exit the device through the collector in far greater proportion to that of the base.

The base-collector junction is lightly doped on both sides to increase amplification and also to maintain a wider deletion region and a relatively high reverse breakdown voltage. This allows a much higher collector supply voltage, even up to hundreds of volts.

As the Bipolar Transistor is a three terminal device, there are basically three possible ways to connect it within an electronic circuit with one terminal being common to both the input and output:

The Common-Collector configuration is characterized by high input impedance, low output impedance, no voltage gain, and high current gain. The connection to the collector is common to both the input signal and the output signal through the power supply.  This type is commonly used in Voltage Follower or Emitter Follower circuits.

In the diagram on this page, the three terminals of each transistor type are labeled as Emitter (E), the Base (B) and the Collector (C) respectively. The construction and circuit symbols for both the PNP and NPN bipolar transistor are given with the arrow in the circuit symbol always showing the direction of "conventional current flow" between the terminals.