Resistors are probably the most widely used component found in electronic circuits. Resistors are one of the three basic "passive devices", with the other ones being capacitors and inductors.

As a potential difference is applied between the two terminals of a resistor, a current will flow in proportion to the voltage.

A resistor is constructed of a material which will attenuate the current flow by impeding the progress of electrons as they pass through it. The atomic structure is such that more electron collisions will take place (compared to a conductor, where less collisions take place), which results in the dissipation of heat. This property allows certain types of resistors to be used as heating elements in electric heater.

Resistors can be classified as either fixed or variable. The fixed type is the most common, and is designed to have fixed value of resistance that never needs to be adjusted. The variable type has a third connection to a slider element between the two end terminals so its resistance can be easily adjusted. This article will only focus on the fixed type, with its various types, configurations, and uses.

Resistors are components which obey Ohm's Law, I=V/R, which means that the current (I) is proportional to the applied voltage (V), and depends on the value of resistance (R). This basic equation can be re-arranged to calculate V or R separately also if the other two values are known. The resistance is designed to be a fixed value and is determined by the properties of the material used.

The two main parameters associated with resistors are their total resistance in ohms (Ω), along with their safe power-dissipating rating in watts (W). Sometimes tolerance is given as a third parameter.

Other parameters are also considered in circuit design, and these include Temperature Coefficient, Voltage Coefficient, Noise, Frequency Response, Power as well as Temperature Rating, Physical Size and Reliability. Their importance in a circuit depends on the application, as some need higher power ratings, higher currents, more stability, etc. The manufacturers or component supplier's data sheet should supply the necessary information.

The maximum power dissipation rating is the second most important parameter after resistance value. This rating determines the power that can be safely dissipated in the form of heat. This heat causes the temperature to rise, which could change the resistance or damage the device if it is too high. The basic equation for power calculations is:  P = V x I. This equation can be combined with ohm’s law to calculate power from resistance value along with either voltage or current:  P = V2 / R or P = I2 / R. Most engineers design their circuit’s operation so that the power (P) is well below the maximum power dissipation rating.

Standard practices state that the maximum actual dissipation should never exceed around 60% of the rating of the particular type of resistor, which improves reliability.

Because of this, there is an added component added onto resistance at higher frequencies which cause phase shift, and this is called reactance. A plot of frequency response should indicate the frequency where this reactance starts to become significant.

The structure of the resistor and its construction will determine the amount of stray inductance. Surface mounted resistors tend to have the lowest inductance, while the wire wound type has the largest, because of its coil construction. All resistors possess a finite shunt capacitance across their terminal, which also adds a reactive component to the resistance at higher frequencies, but this can usually be controlled by fabrication techniques.

For larger resistors, such as wire-wound resistors, the resistance value is printed onto it in the normal way. A colour-coding scheme is used for the smaller resistors that are commonly used. As parts are arranged in a circuit, printed numbers would be difficult to read in some cases, so a color-coding scheme offers better readability. 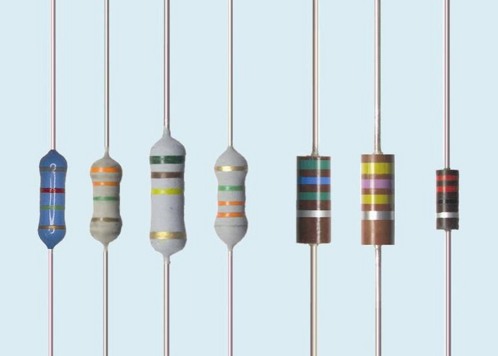 A banding scheme is used for the colour-code, and there might be three, four, or even five rings or bands on a resistor. The chart below explains the meaning of the first four bands. The first two indicate the significant digits in the value. The third band is a multiplier and is a power of ten to which the significant digits should be multiplied. For example, a resistor with brown, red, and orange bands would have a value of 12KΩ.

If there is a fourth ring if it will indicate how accurate the resistor is, and is the tolerance level as a percentage. Most resistors these days are either 2% or 5% of the stated value. The fifth ring, again if it is present, indicates temperature coefficient. Temperature coefficient is indicated in ppm/C (parts per million per degree C), and this is a very important parameter for some critical applications.

The newer surface mounted resistors will sometimes have values printed on them. They are usually marked with only the two significant digits and the multiplier. These components are too small to print any more on them.

There are many different Types of fixed Resistors available, from very small surface mount chip resistors up to large wire wound power resistors

This type of resistor was once the most common type available, but now is seldom used as they have been overtaken by metal oxide or carbon film resistors. This resistor is considered too large nowadays for most applications and also has a large negative temperature coefficient. The resistance values would often change because of heating or aging effects.

The resistor is formed by mixing carbon granules with a non-conductive material to obtain a specific resistor value. A resin is added and the mixture is formed into a long cylinder and cut to size. The granular nature of the carbon caused high noise levels to be generated as current flowed through it. They do have one advantage though, in that they don’t have the inductance issues common to metal oxide or carbon film resistors. They work well at frequencies up to a few Megahertz (MHz). They are still used in applications such as power supplies because of their reliability.

This type of resistor is constructed in a similar way as a Carbon film resistor, except that instead of using a carbon film, it uses a metal oxide film deposited on a ceramic rod. The resistance is adjusted here also by cutting a helical grove in the film. The film is then protected using a conformal epoxy coating. Metal oxide resistors have a temperature coefficient much less than carbon based resistors, which is around + or - 15 parts per million per degree Celsius. They also exhibit much lower noise levels than carbon types of resistors. Better tolerances are available down to 1%, with 2% or 5% being standard. Lower tolerances can be ordered along with custom values. Metal oxide resistors have become the most widely used form of resistor nowadays.

This resistor type is mostly used in higher power applications, usually more than 5 watts, as they can tolerate higher temperatures. Almost all high-precision instruments use wire-wound resistors because of the high stability of wire as a of resistance material. Wire wound resistors are made by winding resistance wire (a wire made from a higher than normal resistance metal) around a form. The resistor is then usually coated with enamel. The more expensive varieties are wound on a ceramic former and they may be covered by vitreous or silicone enamel. Sometimes the wound element is fitted inside a ceramic or metal package, which assists in heat dissipation. Along with their higher power rating, this resistor type has a relatively low level of temperature coefficient. Wire Wound resistors are easily identified by their large size and sometimes by the coil visibility. Wire wound resistors are notorious for exhibiting inductive properties because of their coil construction, so they may work well up to a few KHz.

This is the type of resistor that is used in the popular surface mounted resistors. This type is formed by a vacuum deposition method that is used to place the resistive material onto an insulating substrate. This type of resistor is commonly used for making printed circuit boards. A film resistor provides a stable and accurate resistance. Thick films are made in the same way thin films; except that they also have some extra compounds like glass and also a screen printing liquid. Film type resistors can act as ideal resistors in the range of up to hundreds of MHz. Although there is a certain type of film type resistor with a spiral construction that is only good up to a few MHz, because it tends to act like an inductor.

Diffused resistors are fabricated by using the same techniques used to produce transistors on an integrated circuit. A diffused base, emitter, or epitaxial layer is formed as a bar with contacts at its extremities. The resistance depends on the length and cross section of the resistor region and the impurity doping level.